An open letter from Bob to MaRo


You're pretty good at dropping Magic bombshells, but I honestly never felt all that impacted. Sure, innovations would change things, and decks and colour trends come and go, but Zombies are, you know, hard to keep down.  There's almost (almost) always a Zombie in the set, sometimes there's even a non-Zombie that shares the love, (here's looking at you, Mr. G.T.!) and, even if we lose some pallor once in a while, it's never long until someone leaves a grave - or twenty - open by mistake, and we all come shambling out again.  Even the occasional Undead Slayer can't keep the vitally challenged from our un-lives for very long.  Hey, it's even a bit of a compliment that there's a dedicated hate card in an expansion with no particular Zombie theme; shows us you still care, you know?

Now, picture the scene a few months back, when you announced that you were coming to Innistrad to celebrate the classic "Horror Tropes".  We were all very happy: we gave the tombs, coffins and general underworld a bit of a dusting; got the spiders working on some killer cobwebs; wiped the oil and grease off the door-hinges and rattled a few tombstones.  You have to understand that there's a lot of expectation here.  We're going to see new faces, do new things, get out and shake it all about, and for a few expansions, feast on some brains. The vitally challenged are BACK, BABY!!  Right on!

So, spoiler season comes around and Noel goes first: BOOM!  Blue Zombies.  WOW!!  It's not like we've never had them before, (they are like the side of the family that doesn't get brought up much, except at Halloween when every-one's had much too much Alco-brains and that always ends up the same way: a 100-way game of "Which one is my Metatarsal") but, cool, this is a good thing, right? The scene has changed since Alara, Invasion and, eh, Homelands...

Anyway, a Rooftop Storm?  Frickin' AWE-SOME!! (though I failed to see the connection.)  It means we have to work with that arrogant ass (assin) Thraximundar instead of me, but I'll happily take one for the team if it gets people clamouring to actually become Zombies just to join in the fun!!  It's like we've become glamorous Vamps all of a sudden.

Then on September 5th, you drop the bomb.

I said that while I didn't mind having flesh golems, I still wanted the more traditional zombies. [snip]  The Dawn of the Dead zombies could stay in black where they've always been.  The Frankenstein's monsters / flesh golems, though, could play into a theme we wanted to explore in blue: the mad scientist.  Blue has always been about knowledge, so the idea of crazy men doing horrific experiments in a search for knowledge felt perfect for blue.
Ok, so far so good.

As this was top-down design, we also realized that the two types of Zombies wanted to play differently. For the black Zombies, I was interested in building a Zombie deck I'd never seen.  Magic has had a few Zombie decks over the years, but they tend to be fast and aggressive (more like what are sometimes called zoombies).  That's not how zombies work in an archetypal zombie apocalypse story.  Zombies, individually, are slow and not particularly hard to kill.

Woah!!  Wait, wut?  We've never been "fast".  Maybe a couple of guys got in close with some knights and horrors, but that's hardly representative of the entire Zombie Nation!

Scathe Zombies aren't scary, but how about thirteen Scathe Zombies?  How about twenty-six?  The "enter the battlefield tapped" text you'll see on a few of the Zombies is our attempt to convey the flavor of them being slow.
Enter.  The.  Battlefield.  Tapped.


You take one of the two most debilitating come into play abilities in the history of competitive Magic, and you slap it on an entire type because you watched "Shaun of the Frickin' Dead" once too often?


Are you shitting me?


What's next? Merfolk getting "can't attack if opponent's don't control an Island"?  Kithkin get -1/-1?  Or wait, no, let's give "Ping" to elves because they have bows in Lord of the Rings!!!  It's not like the colour-pie matters any more anyway, eh?  Treefolk are physically rooted to the ground, even they don't have this new keyword: "Slow"!

Worse still, you run to twitter for some digital high-5s with the rest of the Anti-Zombie League over an 8-mana sorcery that does exactly nothing when it's played!!  Adding the "Slow" mechanic to Army of the Damned makes an already expensive card unplayable.  Who's going to "W00p!!" their top-decked, 8-mana sink "solution" if it's never a solution?

maro254 Mark Rosewater
I'm curious on everyone's thoughts on Army of the Damned. (I'm a longtime zombie fan if you were unaware.)
5 Sep Favorite Retweet Reply


(I'm a longtime zombie fan if you were unaware.)


Yeeaaaahh, we’ll just come back to that bit later.


The only saving grace is that you made Army of the Damned a Mythic, so, hopefully, the rarity value will keep it from ever getting played.  Looking at it from another angle: You sacrificed a Mythic slot for this...... >shudder<... and we really LOVE sacrificing things.  The other thing that got sacrificed is that awesome name!  Army of the DAMNED!!  I love it!!


What's that?  It's attached to the card that won't save me?  Hang on, I'm sure I've got a dead clown around here who'll do a frowny face for you.

Ok, ok, I get it: You want to make the set flavor-full.  That's cute and all, but this is a burning brand to all my brethren. Go screw with Vampires! You've got Day/Night now, right? Make them burst into flames every second turn.  Where's the "flavor" now?  I'm not really savouring it if it gives to everyone else but screws around with just one group. At least you're not printing more cards that hurt Zombies.....

What’s surprising and, frankly stunningly obvious, is that you have yet to make any sort of mechanical reference to our dietary preference: munching on brains.  Unless....no, wait! Did you give the mono-blue Rare Zombie, Undead Alchemist, one of those “Frankenstein monsters”, the expressly very “black” zombie mechanic (according to your own criteria) of draining an opponent’s deck, their “brains”, as it were?

What a shock!! Blue gets the black mechanic. What the hell is a Frankenstein Monster doing eating, or in any way encouraging others to eat, brains?

Hang on: What’s going on with those interloping, Mono-Blue zombies anyway?

1.) A mythic Mono-U Zombie, maybe a little under-costed.  Oh, and it flies too.
2.) A similiar, uncommon trampler.
3.) Another under-costed flier at common in the same vein. Cheap, flying and trampling for Zombies, eh?


Seriously, why don’t you just copy and paste “F**k you, Mono-B Zombies!  And you COTB Tapped too! Ha-Ha!” into their flavor text?

Could this have been even more of a slap in the face if you had actually tried? (And, no, that’s not an invitation!)  But wait!

(I'm a longtime zombie fan if you were unaware.)

No, seriously, start supporting Elves or Merfolk.  “With friends like this”, and all that.


So, yeah, have your fun, your little laugh, but let's not make a habit of it, eh?  If this goes on, I’ll seriously have to think about being re-animated as a Demon or even >shudder< a Horror!!


And MaRo, when you're finally under my dominion, we can sit down and have a long talk about the flavour application of mechanics! 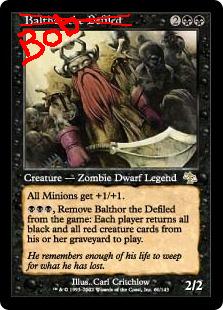