November is Crossover Month at Commandercast. Overlord Andy ordered his legion of writers to get out there onto the blogosphere, siteosphere and any other kind of -sphere they could find. Their mission: Spread the CommanderCast Word and send back writers to do the heavy lifting for them whilst they are chilling out as honoured guests on blogs such as The Crazy 99. My own Commander legionaire is Maxwell "Max" Kautsch, usually responsible for the Peasant Rebellion articles on the Commander mothership. 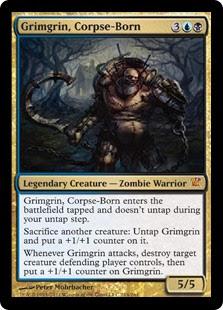 For Crossover month, Owen and I planned to look at the state of tribal Zombies in Commander now that we have Grimgrin, Corpse-Born in our lives.  I was going to try to make a case for why you might play Zombie tribal with Grimmy rather than the defending multicolor Zombie champ, Thraximundar.  So I started with Cassidy’s sweet “Grimgrin’s Zompocalypse” build and make it a little less Zombie-heavy and a little more combo/control oriented. I’ve always loved Cloudstone Curio and couldn’t resist pairing that with Rooftop Storm.
Although the deck experienced some success, mostly on the back of Curio/Rooftop Storm/Grixis Slavedriver with a Vengeful Dead and Grimgrin on the field, the biggest issue the deck faced was classic B/U: no artifact or enchantment removal.  Even the best of the bounce spells (Venser, Shaper Savant/Cryptic Command) and colourless removal (Oblivion Stone/Karn Liberated) did not seem to be cutting it often enough, leaving me wanting for the red in Thrax’s color identity.  My inclination to just Thrax it up myself was bolstered by discussions on the intertrons resulting in the general consensus that Thrax is still the better Zombie general.  After all, Thrax has haste, a shroud-proof sac ability, and red means MUCH better artifact hate than what a B/U deck offers.  I’m not saying Zombie tribal with Grimgrin can’t be good; I mean, Cassidy’s awesome Future Sight/Rooftop Storm/Gravebane Zombie combo is easier to get into play because a U/B deck makes UUU more efficiently than a U/B/R one.  And his build seems amazing.  But as Cassidy himself mentions in the comments of that article, any truly desirable card in that deck, including Grimgrin, could just as easily be played in a Thrax build.  Yup, Owen, you were right.  :)
So the question is, if Grimgrin isn’t optimal to lead your Zombie army, and if it’s doubtful he can unseat Wrexial, the Risen Deep as a better general for a traditional B/U control build, does Grimgrin really have a place in Commander other than as an auto-include in a Thrax Zombie tribal deck? 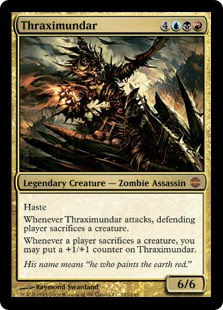 This is the third clause of rules text on Grimgrin, Corpse-Born, a 5/5 for 5:
Whenever Grimgrin attacks, destroy target creature defending player controls, then put a +1/+1 counter on Grimgrin.

Both cards cause opponents to lose creatures when they attack, and both get bigger for each creature that hits the yard.  This means that the decks are likely to share cards that derive a benefit from creatures dying.  Skullclamp, Grave Pact, Butcher of Malakir, Mimic Vat, and Nim Deathmantle would be probable includes in either.  Grimgrin’s ability only results in destroying a creature if it is successfully targeted, which makes the ability vulnerable in a format rife with Lightning Greaves and Swiftfoot Boots, while Thrax’s triggers a sacrifice that doesn’t care about targeting (although Grimgrin has the advantage against a token deck because he can snipe).  Grimgrin is cheaper, but ordinarily can’t swing until turn 6, where haste lets Thrax swing only a turn later.  Given Thrax is not disrupted by something as common as Greaves, along with haste and access to red, I would agree that the fight goes to Thrax.
Except that we forgot to mention the first and second clauses of Grimgrin’s rules text:
Grimgrin, Corpse-Born enters the battlefield tapped and doesn't untap during your untap step.
Sacrifice another creature: Untap Grimgrin and put a +1/+1 counter on it.

The knee-jerk reaction is to view these mostly as drawbacks.  Yes, it is generally disadvantageous for a creature to enter the battlefield tapped.  Yes, you are potentially looking at card disadvantage if you have to sacrifice one of your own creatures before Grimgrin can even attack.  Yes, it’s too bad Grimgrin can’t sacrifice himself to prevent himself from getting tucked.  What I find interesting about Grimgrin is not only that he first swings as a 7/7 and effectively gets two more +1/+1 tokens for each subsequent attack, but also that he is the only general in print who can control when he untaps.
Hmmm.  For starters, Paradise Mantle on Grimmy results in a de facto Phyrexian Altar, a card with a track record of Commander viability.  After some Gathering, a deck started to come together; it just didn’t involve Zombies.  So rather than bore you with a Grimgrin Zombie tribal deck when you should just read Cassidy’s article or pull out your Thraximundar, I bring you Grimgrin’s Gatling Gun. 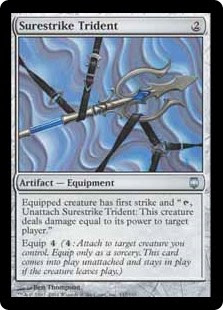 The deck really only needs three things to fire away, given adequate mana: Grimgrin (the gun), some tokens (ammunition), and Surestrike Trident (the pain).  The Trident got some love when infect came out, for obvious reasons, but otherwise doesn’t seem to show up a whole lot.  In addition to targeting your opponents, it gives the equipped creature first strike, which seems relevant for a general who can destroy creatures only if he risks a trip to the red zone.  But how about that second ability with a pumpable general?
Turns out, the Trident and Grimgrin happily provide the deck’s win condition without ever getting near the red zone as long as Grimgrin isn’t summoning sick and there are enough creatures to sacrifice.  A couple of “shots” is usually all it takes, depending on how long Grimgrin has been allowed to accumulate counters or if the deck is in position to make him infinitely large (and no, you can’t use the Trident to inflict general damage).
So how do we get there?  The Trident costs 4 to equip, a relatively expensive thing to do at sorcery speed, so land fetchers like Wayfarer’s Bauble and Pilgrim’s Eye, along with and mana rocks and Tezzeret the Seeker, help out a lot.  Ashnod’s Altar is great with tokens, and even better with Nim Deathmantle and an ETB token generating creature.  Paradise Mantle can come in handy, too, and you can of course search it out with the ubiquitous Trinket Mage.  Obviously the Mantle turns any old creature into a BOP, which is good, but the fun begins when it’s equipped to Grimgrin.  When Grimgrin is wearing the Mantle, sacrifice a token to untap Grimgrin and give him a +1/+1 counter.  He taps for mana, sac another creature, he untaps, gets another counter, and taps for another mana.  Rinse and repeat.
So, what if you resolve an Army of the Damned under these circumstances?  Means you get up to 13 sacrifice triggers, making Grimmy +1/+1 each time, while also making more than enough mana to tap him and unattach the Trident as many times as there are opponents.  And then you can look blankly at your opponents, channel your inner Brick Tamland, and say “I killed a guy with a trident.” 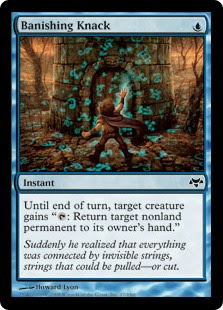 Killing guys (or troublesome planewalkers, if need be) with a trident makes for good fun with Grimgrin’s untap mechanics, but are there alternative effects for his Gat?  Ultimately, only Banishing Knack makes the cut because it helps shore up the deck’s weaknesses against artifacts and enchantments.  Casting this at the end of someone’s turn yields a lot of targets (and yuks) for only 1 blue mana as long as Grimgrin is accompanied by some tokens on the field.  It is absolutely conceivable that you could bounce all your opponent’s non-land permanents right before your turn given enough tokens.
Which brings us to an obviously important component of a deck like this: where are we going to get the tokens to feed a hungry Grimmy, and overcome the “card disadvantage” otherwise inherent in his ability?  My personal favorite has always been creatures with ETB effects creating tokens, especially in black because of black’s ability to recur creatures and not much else.  Blue fails when it comes to generating tokens via creatures, both black and artifacts have some good choices:
Grave Titan
Wurmcoil Engine
Marsh Flitter
Skeletal Vampire
Precursor Golem
Endrek Sahr, Master Breeder
For once Oona, Queen of the Fae is less combo finisher and more token generator, and cards like Reassembling Skeleton add to the stable of token-generating creatures for our “fodder” suite.  I also included persist baddies Glen Elendra Archmage and Puppeteer Clique because they can trigger two sacrifices in a pinch, in addition to their killer abilities.  Army of the Damned and Rite of Replication make oodles of guys, and watch out for the old kicked Rite on Precursor Golem.  Otherwise, ETB creatures such as Mulldrifter, Trinket Mage and Snapcaster Mage make for palatable sacrifices.  And then there’s the Mimic Vat, a “good stuff” addition that happens to be quite on-theme.
The final necessary component is cards that provide benefits when creatures go the the graveyard, all of which fit nicely in Thrax as discussed above.  The most important of those are of course Skullclamp and Gravepact.  The one card I really wanted to get in but couldn’t was Falkenrath Noble. Probably win-more, but you’d think it would have its moments in a deck where the general can sacrifice any other creature for free at instant speed.

Otherwise, the deck’s choices were determined by its needs for card draw, control, and mana fixing/acceleration.  As you might expect, things like Consecrated Sphinx, Decree of Pain and Damnation made it.
Graveborn Muse has nice synergy with Grimgrin and what’s left of the Zombie flavor in Grave Titan, Nim Deathmantle and Army of the Damned.  Along with its ability to ramp, the aforementioned Ashnod’s Altar is one of a handful of sac outlets to help prevent Grimgrin from getting tucked; I also threw in High Market and Phyrexian Tower.   Other key lands include Coffers/Urborg for ramp, Academy Ruins, and Shizo, Death’s Storehouse to give Grimgrin evasion if he needs it.  Tolaria West searches out Pact of Negation, Maze of Ith or half of the Urborg/Coffers dream team.
Finally, although the deck can’t deal with artifacts the way a red deck can, its ability to win without attacking allows for long range wins that may not require the same degree of removal as if the deck were forced to win with combat damage.  Even so, Kederekt Leviathan and Steel Hellkite join Karn to help with board control.  Life’s Finale rounds out the removal suite; love that card with Puppeteer Clique.
So maybe Grimgrin isn’t a better multicolored Zombie general than Thraximunder, but Cassidy showed he’s absolutely viable as the leader of a Zombie horde.  While my sub-Zombie theme failed as per Owen’s prediction, I have found that Grimgrin’s Gatling Gun v1.0 makes for fun games and a unique win condition.  I mean, if you don’t want to kill a guy with a trident....I don’t know what to tell you.
Deck list here:
Grimgrin, Corpse-Born
Skullclamp
Lightning Greaves
Sword of Light and Shadow
Surestrike Trident
Paradise Mantle
Nim Deathmantle
Swiftfoot Boots 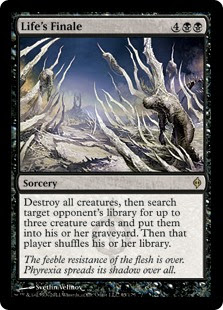 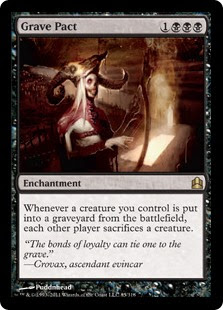 EDIT: Here's the otherside of the crossover article over on Commandercast. Enjoy!
Posted by Zimagic (Owen) at 22:53