Finding the Key to the Zedruu Puzzle

I'm having a huge problem solving the Zedruu puzzle. That is, making a deck where she's important but the deck isn't just a lame donate duck. Mixing control with getting the engine going and eventually winning is quite a lot for that uneasy mix of colours.


I think I've found the key to the puzzle that allows Zedruu to give away crazy permanents ....... for benefit! 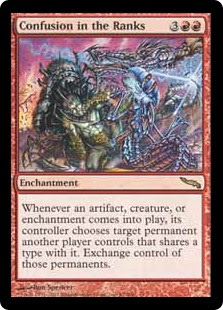 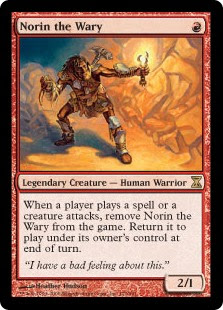 Confusion in the Ranks  effectively gives away almost every single non-land permanent you put into play. While your opponents will get the opportunity to fight over various permanents on the board, it's actually quite rare that, when your turn comes around, you're going to want to take one of your own permanents back. If your permanents fly back and forward between opponents, you don't care, it will still trigger Zedruu. Add in Norin the Wary and you're guarenteed to have Zedruu on your side of the board come your upkeep (if she's still alive) to pile up on those life points and free cards.
One obvious additional advantage to Confusion is that you don't need Bazar Trader, Donate or Zedruu to give away your nasty artifacts or enchantments, they just fly away automatically when they come into play. Other players are extremely unlikely to choose to pick up a Lich's Tomb or Illusions of Grandeur from some unfortunate victim which makes sure your gifts remain given.
Posted by Zimagic (Owen) at 19:24

Email ThisBlogThis!Share to TwitterShare to FacebookShare to Pinterest
Labels: Commander, confusion in the ranks, norin the wary, zedruu